From Kennywood and the steeltowns of the Mon Valley to the bridges and buildings of Oakland, Pittsburgh is a central subject in the paintings of both John Kane (1860-1934) and Robert Qualters (b.1934). Rather than presenting accurate records of the city, familiar sights are transformed by each artist's personal vision and unique style.

Born in Scotland, John Kane was a self-taught artist and manual laborer who gained overnight success when one of his paintings was accepted into the prestigious Carnegie International in 1927. In his paintings, Kane returned time and again to the landscapes, people, and places of Pittsburgh, his adopted home, lending his distinctive viewpoint to common scenes. In Scots Dancers at Kennywood (c. 1933), for example, Kane focuses not on the iconic attractions of Kennywood, but rather on the annual Scottish festival in the amusement park, simultaneously paying homage to Pittsburgh and to his Scottish roots.

Born in the year that Kane died, Robert Qualters has maintained a lifelong admiration for the older painter. In works such as For John Kane, Qualters directly references Kane and his influence. In other paintings, Qualters returns to the same subjects as Kane, but renders them in his signature energetic brushwork and colorful palette, fusing the landscapes with personal mythologies. In Kennywood Memories (1988), for example, Qualters not only depicts the rides and amusement park, but also interjects autobiographical references and images into the composition.

MY PITTSBURGH focuses on the Pittsburgh subjects of two iconic artists, giving special emphasis to the influence that Kane's work had on Qualters' paintings. This exhibition also highlights works in Carlow University's art collection, including John Kane's Mount Mercy, donated to Carlow by Mrs. Elsie Hillman in 2011, and For John Kane and Big Self-Portrait by Robert Qualters, donated in 2017.

As we celebrate Kane's and Qualters' images of Pittsburgh, we ask you to reflect on your own vision of our shared environment: What is your Pittsburgh? Who are the people and what are the places that embody your experience in our city?

In conjunction with MY PITTSBURGH, the Carlow University Art Gallery will host a series of discussions, public programs, and social media initiaties that celebrate the diverse experiences of the citizens of this city. For more information on these events, please visit our website and the gallery's Facebook page and Instagram account.

In 1927, John Kane achieved overnight success when his Scene from the Scottish Highlands (Carnegie Museum of Art, c. 1927) was admitted to the prestigious Carnegie International exhibition. Jurors and critics celebrated Kane's naive style, and the artist was heralded as a "genius" in the press.

Having spent most of his life as a manual laborer and with no formal training in art, Kane was an unlikely star of the modern art world. Born in Scotland, John Kane began working in the shale mines at age 9, around the time his father died. After emigrating to the United States at age 19, Kane worked as a gandy dancer on the Baltimore & Ohio Railroad, a coal miner in Alabama, Kentucky, Tennessee, and Southwestern Pennsylvania, and as a steel worker in local mills. After losing his left leg in a railroad accident, Kane focused his attention on painting the sides of railroad cars in McKees Rocks. Eventually, Kane focused his attention on painting Pittsburgh scenes: bridges and hills of the Mon Valley, Kennywood, and even a Pieta set against the backdrop of the Cathedral of Learning and St. Paul's Cathedral in Oakland.

Kane's acceptance into the 1927 Carnegie International was a breakthrough for this self-taught artist and it catapulted him to fame. By the time of his death in 1934, Kane had exhibited at venues such as The Art Institute of Chicago, The Metropolitan Museum of Art, and The Museum of Modern Art, where he was the focus of a one-man show in 1931. The Carnegie Museum of Art houses the largest collection of Kane's works in the United States. The paintings in this exhibition are excellent examples of Kane's best-known subjects and trademark style. 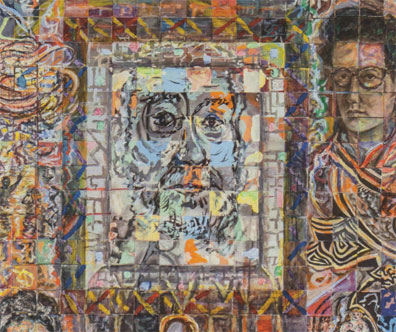 Robert Qualters is an American painter, installation artist, and printmaker based in Pittsburgh, Pennsylvania. His work encompasses traditional painting, as well as murals. and collaborations with other Pittsburgh-based artists across several disciplines. He is associated with the Bay Area Figurative Movement and Representational Painting.

A 1985 Pittsburgh Center for the Arts Artist of the Year and a past president of Associated Artists of Pittsburgh, Qualters has exhibited in Pennsylvania, New York, California, Maine, and West Virginia. In Pittsburgh, he has had more than 30 solo-artists shows at Borelli Edwards, Concept Art Gallery, Carson Street Gallery, the Carnegie Museum of Art, and many other galleries and museums. His work is represented in the permanent collections of the Carnegie Museum of Art; the Oakland California Museum of Art; and the Westmoreland County Museum of Art in Greensburg, Pennsylvania; as well as the main offices of PPG Industries, Alcoa, Hillman Company, the Pittsburgh Foundation, The Heinz Endowments; and many other corporations, schools, government bureaus, and private collections throughout Southwestern Pennsylvania.

Qualters has completed more than two-dozen public murals and site-specific installations. Alongside commissions from The Mercy Hospital of Pittsburgh, The Western Pennsylvania School for Blind Children, Pittsburgh's Three Rivers Arts Festival, Oxford Development Company and others, he has also created more than a dozen murals with Pittsburgh high school students.

In 2017, Mr. Qualters generously donated two paintings to Carlow University: For John Kane and Big Self-Portrait, both included in this exhibition. Carlow University would like to extend a special thanks to Robert Qualters for his generous gift to the University.

“I have been very lucky in my artistic life. I have had teachers and mentors that have had great influence on my work, and have also been beneficial guides in my life. Robert Lepper at Carnegie Tech, never talked down or condescended to me when I was just a naive 17-year-old. In later life, Duane Michals, a fellow McKeesport native, became a friend and patron. Most importantly, Richard Diebenkorn at the California College of Arts and Crafts, inspired me by his dedication to his art and provided constant encouragement through his belief in my work.

Why then, my steady admiration for John Kane, who died in 1934, the year I was born? Before I had actually seen one of his paintings, I studied Sky Hooks, John Kane's autobiography as told to Marie McSwigan, which included Turtle Creek Valley, and reproduced his great self-portrait on the cover. Turtle Creek Valley is a place that I know. Many of his subjects, particularly the paintings that are depictions of mills and the Monongahela Valley I also know well — I grew up there. I saw the original at the Museum of Modern Art; it is one of the most powerful self-portraits of the 20th Century.

My homage to this work in For John Kane (1982) is also an homage to his steadfast practice of using the place that is our shared environment, Pittsburgh and local areas, as the subjects of his art. It inspired me to do the same. The opportunity to exhibit my paintings with John Kane's is a great honor.” 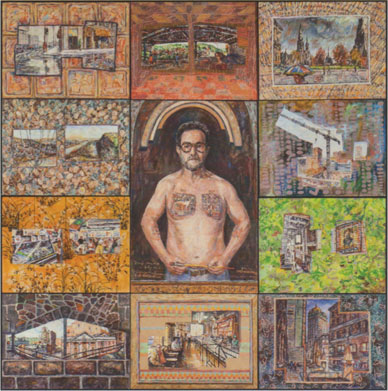 Acknowledgements
The Carlow University Art Gallery would like to extend special thanks to the Hillman family and the Hillman Foundation, Mary and William Price, Dr. Judith O'Toole, Alison Brand Oehler and Dan McCusker of Concept Art Gallery, Barb Conner, Tome Underiner, Dr. Patricia Sheahan, and Marilyn Russell and Lucy Stewart of the Carnegie Museum of Art. Mr. Qualters would like to extend special thanks to Carlow University, and to Sulvia Rhor, who had the idea for KANE/QUALTERS.

For more information or to schedule a private group tour or a class visit, please email gallery@carlow.edu.